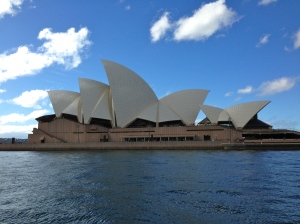 Inaugurated in 1973, the Sydney Opera House is a great architectural work of the 20th century that brings together multiple strands of creativity and innovation in both architectural form and structural design. A great urban sculpture set in a remarkable waterscape, at the tip of a peninsula projecting into Sydney Harbour, the building has had an enduring influence on architecture. 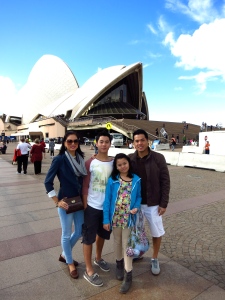 My family and I took the obligatory photo by the Sydney Opera House backdrop.  For most tourists who visit Sydney, this iconic shot is the highlight of their trip.  A series of photo shoots from different angles is an afternoon well spent until there is that one perfect shot for the frames they say.  Then they are happy to share they’ve been there.  But for a few, just seeing it is not enough.  To know the story behind this architectural masterpiece is essential.

A friend encouraged me to join the SOH tour to know more about this landmark.  I think I was more intrigued with the sad story that she said made her cry, rather than the technical dynamics.   The tour cost AUD35 Adult and AUD20 Child.  Quite steep for a 2hour walking tour but very insightful.  I was fortunate to have my daughter with me as a companion and it was pleasant to see her engaged during the tour as well. 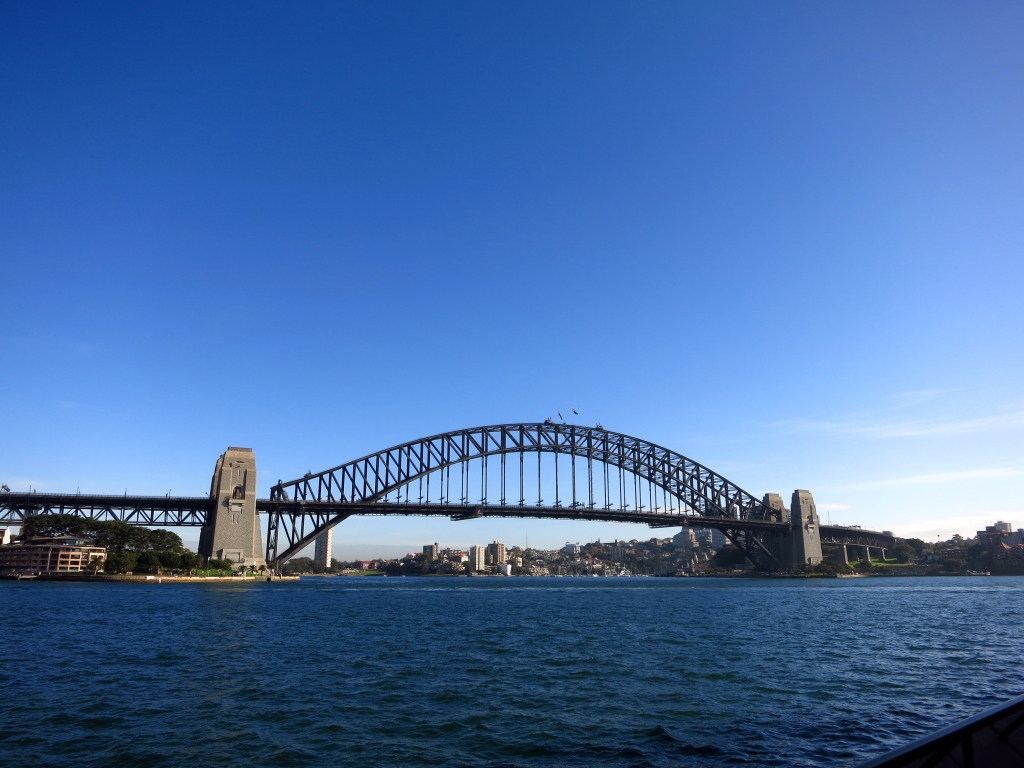 Sydney Harbor is glorious and peaceful in the mornings. No crowds, no performers – just a good space to re-charge.  While waiting for our morning tour to commence, we posed by the other noteworthy landmarks at leisure.  Such as the Sydney Harbour Bridge which is one of Australia’s most well known and photographed landmarks. It is the world’s largest (but not the longest) steel arch bridge with the top of the bridge standing 134 metres above the harbour. It is fondly known by the locals as the ‘Coathanger’ because of its arch-based design. 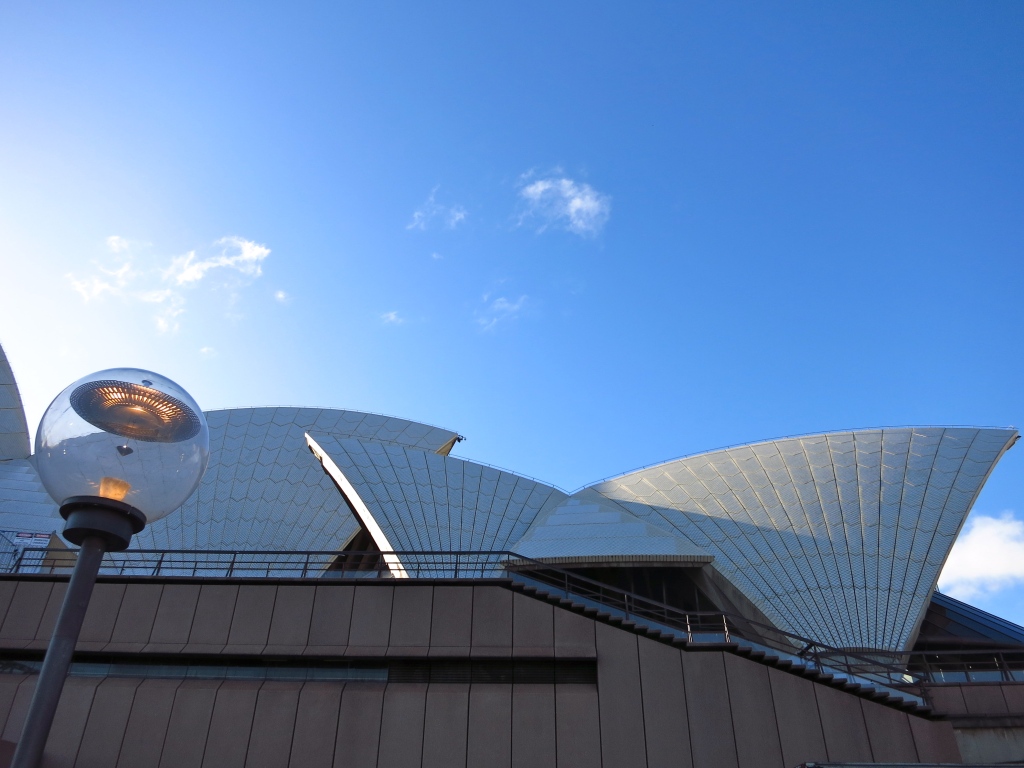 We began our tour by admiring the exteriors.  Danish architect Jorn Utzon, envisioned a distinctive roof with sets of interlocking vaulted ‘shells’ set upon a vast terraced platform and surrounded by terrace areas that function as pedestrian concourses.

Then we checked out the garage. This is of course, was the least glamorous of the sections but of great significance.  The roof structures are precast concrete panels supported by precast concrete ribs. This innovation forms the foundation of the SOH. 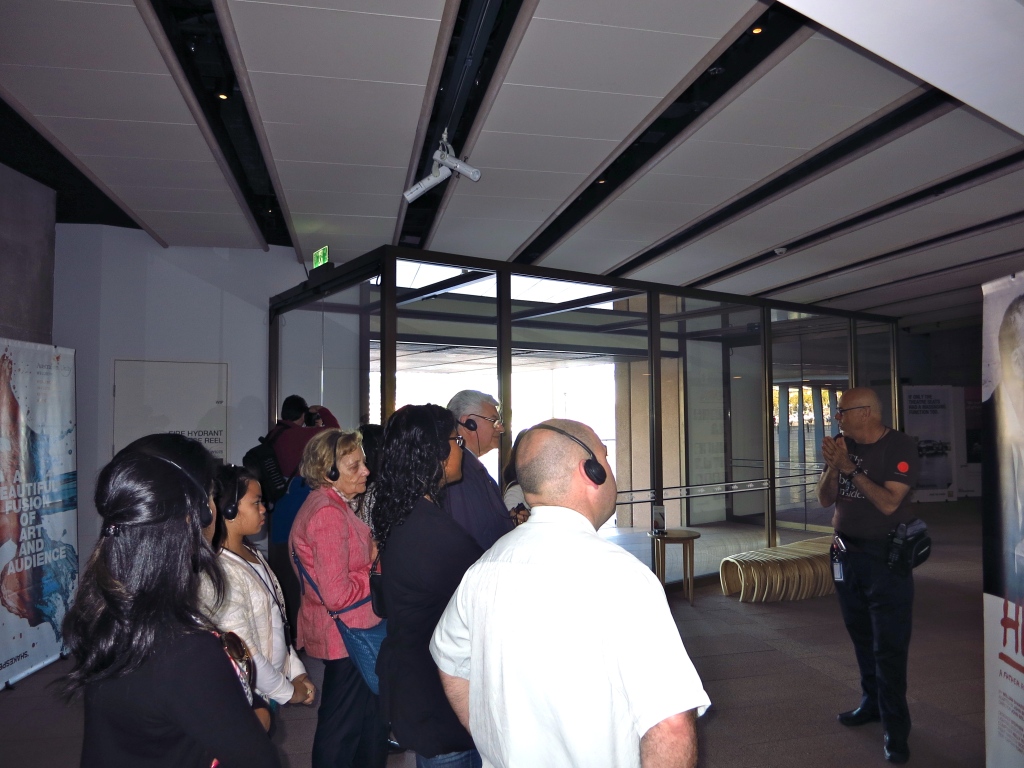 As we entered the building, we were reminded by our SOH Guide of the proper conduct within the property.  After all, this place was a conservatory with artists intently preparing for performances.  Pleasantly, the guides are volunteers who like to share their passion and in-depth knowledge of their proud heritage. I was actually amazed with our guide’s energy.  He was quite informative and very interesting.

The lower ground lobby had these deep picture windows facing the bay.  Our guide explained that these were similar to those in Utzon’s home.  These were recently installed to provide more natural lighting in the area.  It also made the concrete space feel more homey.

Then we entered the Drama Theatre.  It is a proscenium theatre with 544 seats, used by the Sydney Theatre Company and other dance and theatrical presenters. Picture taking is not allowed for copyright and safety purposes. 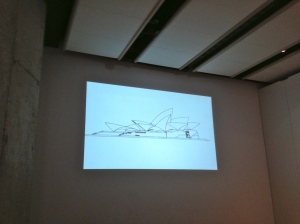 To appreciate the architecture of SOH, we watched a short film on its history. The saga surrounding the design and construction of the building became as controversial as its design. In 1956 the NSW Government called an open-ended international design competition and appointed an independent jury. The competition brief provided broad specifications to attract the best design talent in the world; it did not specify design parameters or set a cost limit. The main requirement of the competition brief was a design for two performance halls, one for opera and one for symphony concerts. Reputedly rescued from a pile of discarded submissions, Jørn Utzon’s winning entry created great community interest and the NSW Government’s decision to commission Utzon as the sole architect was unexpected, bold and visionary.

What was suppose to cost a total of AUD7MM and a timeline of 4years led to an emotional, mental and financial struggle between 1958 to 1973. Sadly, Utzon was forced to withdraw from his position as chief architect in Feb 1966 in response to pressures from the new NSW liberal government re completion of the project. He left in April 1966 with his family, never to return to Sydney to see his masterpiece again.  What a heartbreaking story that was. 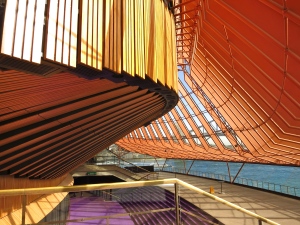 Despite Utzon’s predicament, his work in progress was definitely not in vain.   Sydney Opera House was inscribed in the World Heritage List in June 2007: “Sydney Opera House is a great architectural work of the 20th century. It represents multiple strands of creativity, both in architectural form and structural design, a great urban sculpture carefully set in a remarkable waterscape and a world famous iconic building.” UNESCO.  The expert evaluation report to the World Heritage Committee stated: “…it stands by itself as one of the indisputable masterpieces of human creativity, not only in the 20th century but in the history of humankind.”

We arrived at the receiving area of the Joan Sutherland Theatre.  It was precisely planned to enjoy the stunning harbor view. More fascinating was the interesting fusion of construction materials – showing the internal structure and steel framing of the glass curtain walls at the foyer. Beautiful!

The futuristic design by the hallway made of birch wood prior to entering the world – renowned concert hall was a taste of what to expect inside.

The world-renowned Concert Hall is the Opera House’s most majestic space. The largest of the internal venues, its high vaulted ceiling, white birch timber and brush box panelling provide an incredible setting for your event. The Concert Hall can adapt to a wide variety of performances, such as music concerts, talks and ideas events and comedy. The Sydney Symphony is the major presenting company in the Concert Hall and the Australian Chamber Orchestra and Sydney Festival are also regulars. Major touring artists to have played in the Concert Hall include Eddie Vedder, Kanye West and The Cure.

As if the halls and theaters were not enough to impress, even the “crevices” featured the same modern drama.   The concrete ribs within the narrow passageways looked like fan art and while we were all fascinated with the details, in the midst of my clicking away… I found this amusing picture of a ghostly Adi.  We proceeded unto the secret winding stairs — shortcuts to succeeding points of interests. 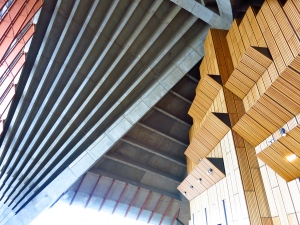 That brought us to the detached Playhouse where Bell Shakespeare Company usually performs.  Unfortunately there was a performance inside so we were not able to see the interiors.  But gazing up, we again marveled at the wood, concrete and metal medley.  It was entertaining in itself. 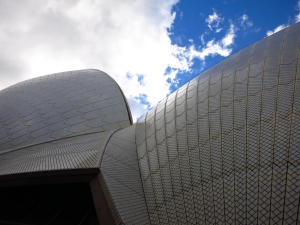 The end of the tour brought us back outside to examine the shells up-close.  The glazed ceramic tiles were specifically designed to withstand the weather.  Each groove was meticulously etched, calculated to direct rainwaters to a certain deposit. The same groove was also made to withstand the strong winds by the bay.  This was also the reason why the shells were curved in a particular way – like the sails of a boat.  To let the wind easily flow through it…. in fact, while we were standing underneath these shells, we were swept within a strong wind tunnel.

In conclusion, total cost in building SOH amounted to 14x the original AUD7MM estimate. Though it presented many obstacles, The Sydney Opera House opened the way for the immensely complex geometries of some modern architecture. When Sydney Opera House was opened by Queen Elizabeth II on October 20, 1973, Utzon was awarded the Gold Medal of the Royal Institute of Architects Australia but was not present at the opening ceremony.  But in 1999, the NSW Government and Sydney Opera House Trust were delighted to be able to reunite the man and his masterpiece. After a number of approaches, conversations and finally meetings, Utzon agreed to be re-engaged to develop a set of Design Principles to act as a permanent reference to guide all future changes to the building.

The reconciliation with the Sydney Opera House in 1999 brought Utzon great pleasure. In 2003, the same year the Opera House celebrated its 30th birthday, Jørn Utzon was awarded the Pritzker Prize for Architecture, the highest award in its field. A year later on 16 September 2004, NSW Premier The Hon Bob Carr officially opened the newly refurbished Reception Hall, renamed the Utzon Room.

Jørn Utzon died peacefully in his sleep in Copenhagen on 29 November 2008 aged 90. His legacy lives on through the World Heritage listed Sydney Opera House and his Design Principles as a permanent record of his vision for the place, as well as the many other magnificent structures he designed around the world.

The tour was very enlightening for us.  We walked out feeling prouder that we knew more about SOH.  It was not only knowing the story but learning the reasons behind certain innovations that were initiated beyond their imaginations.   For my daughter, she not only learned a little history but it taught her a very important lesson – “That with careful calculations and preparations, you can prove to yourself and to the world that your dream / passion is worth pursuing”.  Who knows, it might even become more than just your monument, but a monument for the whole world to admire.