On the second day, I could tell it was going to be a great morning for another round of site visits and our Cape Peninsula Tour.

While I was busy checking out Table Bay Hotel, Anton explored the Marina and was happy to catch a glimpse of the boats used in the Volvo Ocean Race 2014-2015. The race commenced in October 2014 from Alicante Spain and ends in Gothenburg, Sweden on June 2015. 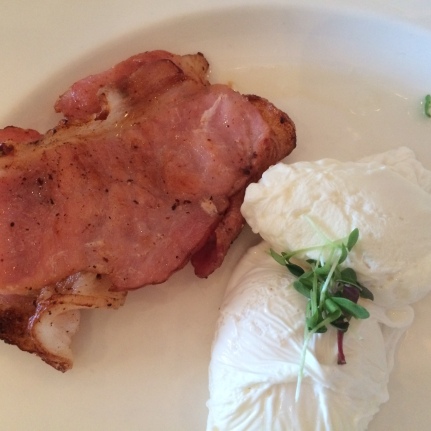 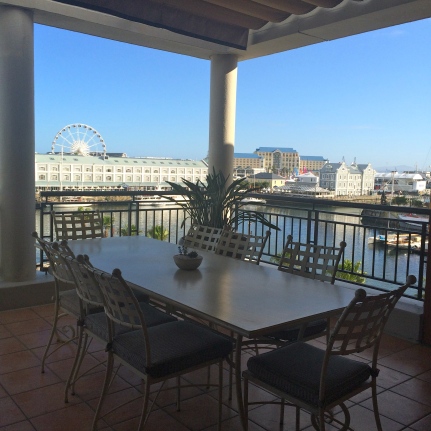 Our lounge and dining area. To the right — behind the curtains is a patio that overlooks the pool area. 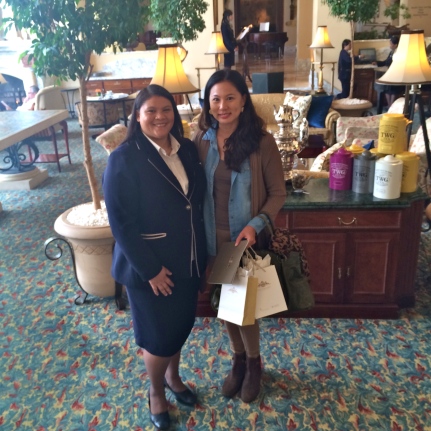 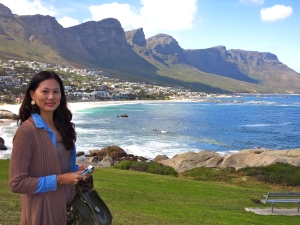 A sightseeing drive to Cape Point and around the Cape Peninsula is a “must do” day trip when visiting Cape Town. The Cape Point day trip is one of Cape Town’s top 10 tourist attractions and ranks with the most scenic drives in the world.

Camp’s Bay is just a few minutes from the Waterfront. It is one of Cape Town’s wealthiest suburbs, famous for its luxury apartments, celebrity lifestyle and white sandy beach. The picturesque suburb with its lush palms and an azure ocean is not only one of the most popular tourist attractions, but it’s also the place to be for the hip young generation of Cape Town. It has a trendy fusion of kiosks, restaurants, cafés and cocktail bars which are all on the main road along the beach.

Camp’s Bay furthermore offers one of the most spectacular, uninterrupted views of the renowned Twelve Apostles, the sandy mountain range of which the Table Mountain forms part of.

There is a pleasant buzz in Hout Bay- a former small fishing village that is now a coastal suburb of Cape Town and home to people from all walks of life. The streets are alive with locals and tourists who flock to a host of curio shops, restaurants and snack bars. The beach is very popular with hikers, paddle skiers and windsurfers.

This charming inlet furthermore provides one with an unparalleled view of the impressive 320 metre high Sentinel Mountain Peak. Hout Bay is also famous for its unforgettable boat trip from Hout Bay harbour to Seal island, where you will find seals playing in the cold waters. 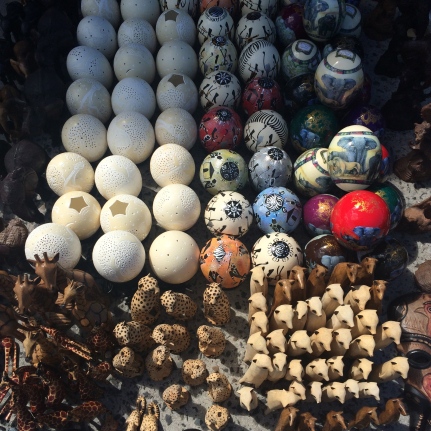 A variety of Ostrich Egg replicas on sale at the Curio Shops along Houts Bay. 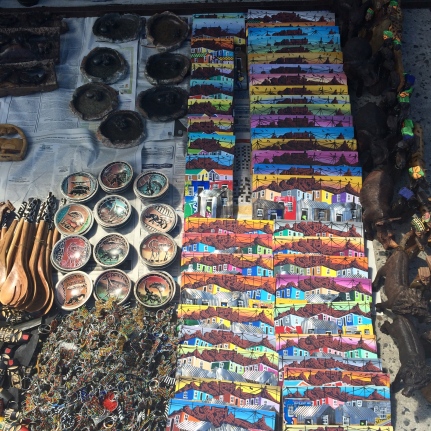 Chapman’s Peak – “Chappies,” as it is called by locals, is regarded as one of the grandest aquatic drives in the whole world. The nine km jaunt meanders through various twists and turns that open up on some of the most awe-inspiring panoramas of soaring mountains and towering cliffs. There are a number of lookout points too.

The Chapman’s Peak Drive is also one of the foremost sites from where the Southern Right Whales can be seen in the months from July to November. 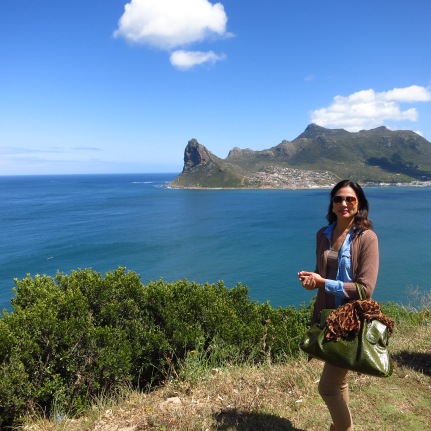 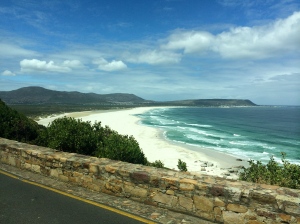 Noordhoek is known for its seemingly endless miles and miles of white sandy beaches. Most often, tourists who do the Peninsula drive stop over for a quick meal to enjoy the view.

As we drove towards Cape Point, our guide explained to us that we were again entering the territories of Table Mountain National Park. It was confusing to leave the iconic Table Mountain back in the city only to realize that we were traveling North to South of the same Park.

It is said that this Cape Point Lighthouse, is the most potent one on the South African coast; with a range of 63 kilometres and a group of three light beams that flashes ten million candlepower each, at 30 second intervals. To reach the Old Lighthouse, one could take a relaxed walk to enjoy the scenery and do some animal and bird watching on the way.

We were warned that the last stretch is very steep. And that we had to be on the lookout for the extinct chacma baboons that still roam the Cape Peninsula area. We were not supposed to encourage them to come closer nor make make any attempts to feed them.

And so we opted to take The Flying Dutchman Funicular instead – an environmentally-friendly cable-drawn railway system that has been named after the legendary ghost ship that completely vanished at sea during one of the infamous Cape Storms.

As the park remains a Natural Reserve, wildlife like ostriches, elands, baboons, zebras and dassies can be seen roaming around nonchalantly. This was a treat for us! 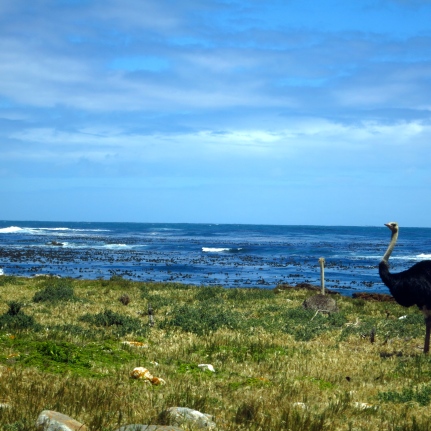 The legendary Cape of Good Hope is particularly known as being a guiding post for sailors of old and is still referred to as “The Cape” by sea travellers today.

Some also refer to Cape Point as “the place where two oceans meet,” speculating that there is a clear line visible at the confluence of the Atlantic and Indian Oceans. But while there appears to be a difference in the colour of the water, there is no scientific proof to substantiate it. 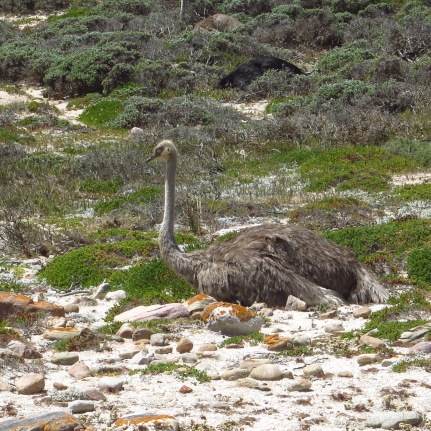 Loved how calm this ostrich was even if there was a group of us shooting it from a few meters.

Seeing the delightful colony of Jackass Penguins at Boulder’s Beach, with their comical braying call, is bound to become one of those experiences that will be imprinted in your heart and mind for a long time. They share the same beach front as the homeowners around the area; but they are protected and respected. 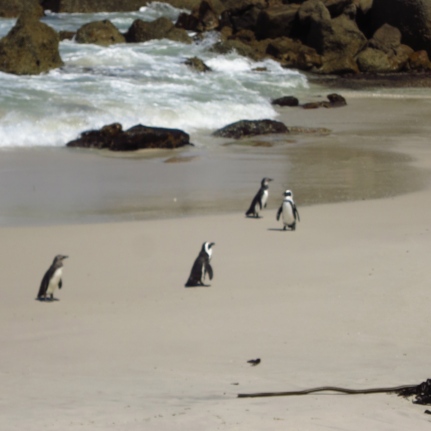 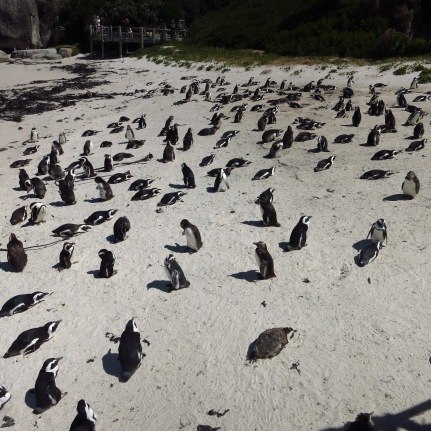 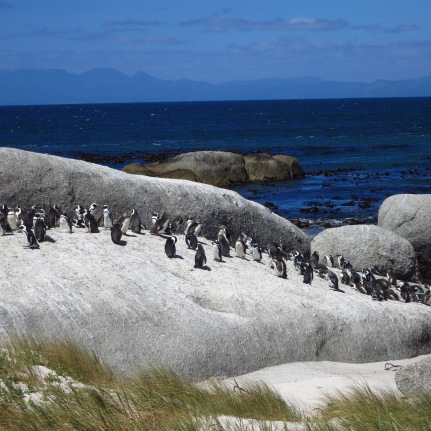 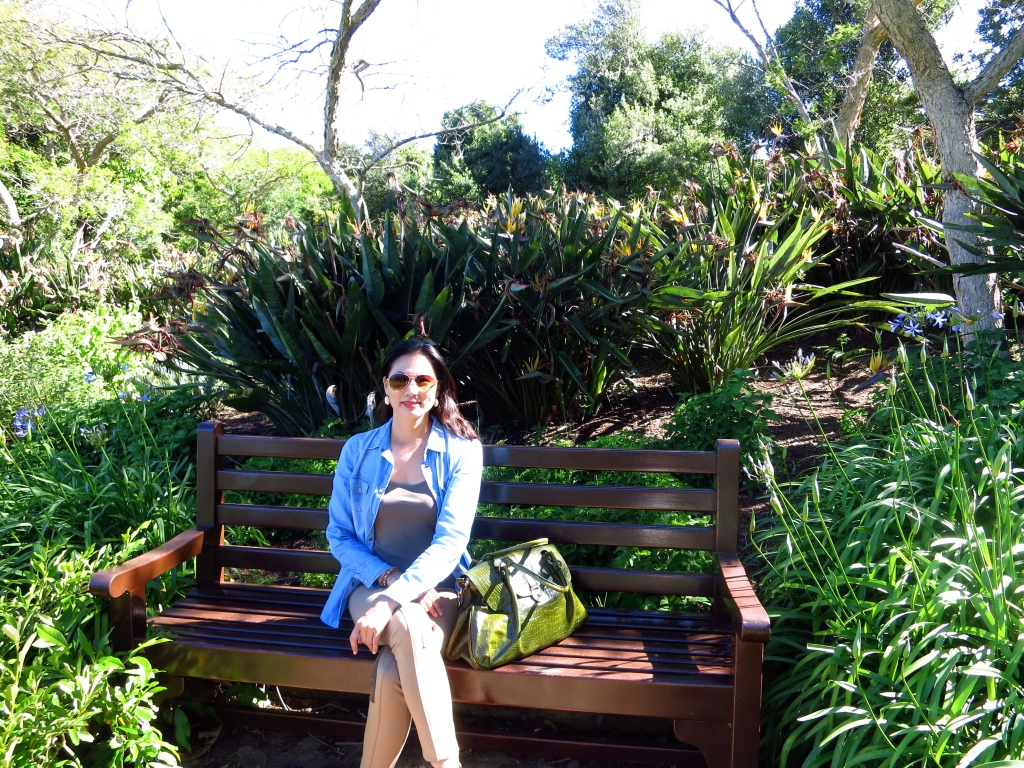 As we weaved our way back to the City. We took a slight detour to see the famed Kirstenbosch National Botanical Gardens. It is one of the most beautiful botanical gardens in the world, especialy because it’s back-dropped by the slopes of the Table Mountain. Kirstenbosch was established in 1913 to promote, conserve and display the extraordinarily rich and diverse flora of southern Africa, and was the first botanic garden in the world to be devoted to a country’s indigenous flora.

We started by the Herb Garden. It was so interesting to read descriptions and benefits of each herb.

More than just a garden, Kirstenbosch is part of a nature reserve. The 36-hectare garden is part of a 528-hectare estate that contains a protected natural forest and fynbos, along with a variety of animals and birds. The Kirstenbosch Estate borders the Table Mountain National Park, and the Garden merges seamlessly with the mountain.

Once we escaped the forest we found ourselves concert grounds. This is a popular Sunday venue for families and friends who can watch recitals and concerts while enjoying a leisure picnic. 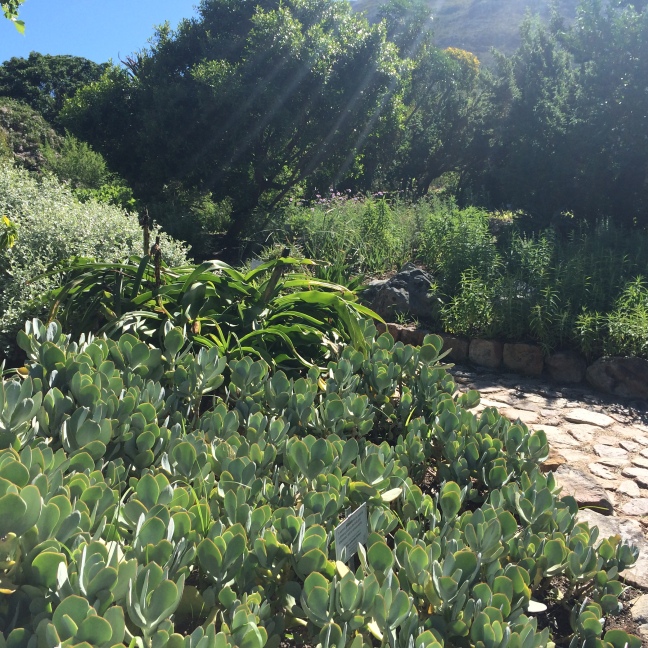 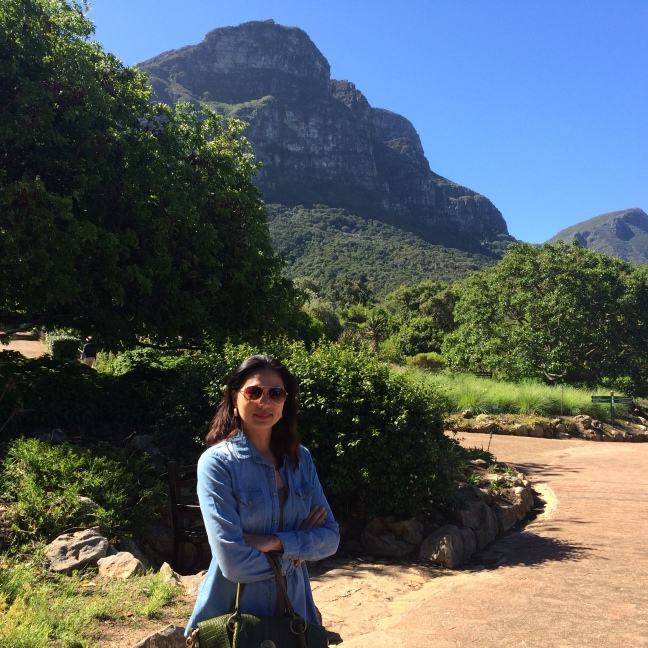 Picturesque view of the gardens with the Mt. backdrop. 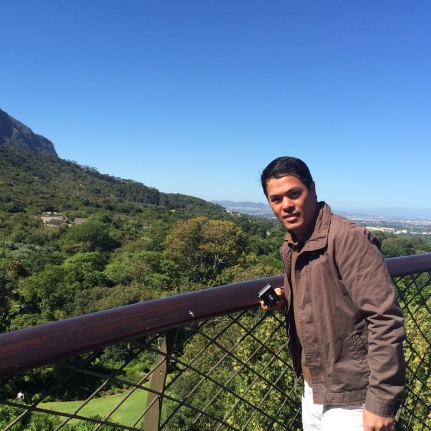 Descended the canopy and chanced upon this fairytale -like pond with some ducks bathing. 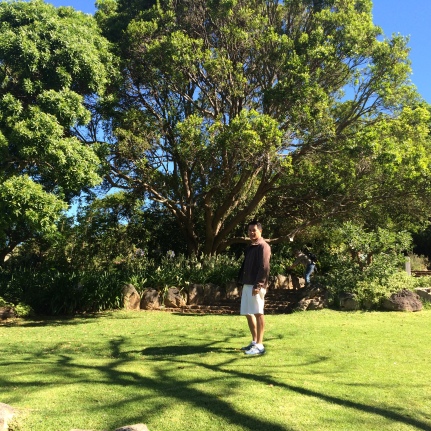 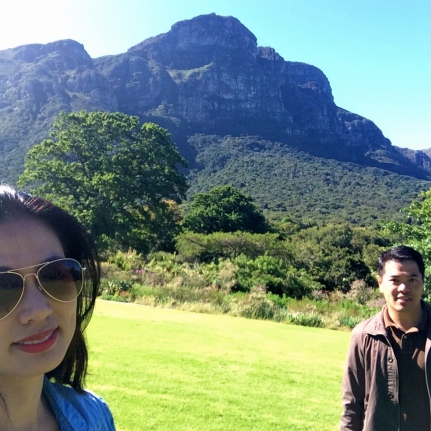 Admiring the views from the Tree Canopy Walkway – tucked away between some 430 trees.

Got lost in the Rainforest – Couldn’t help thinking we were in “Avatar”.

We headed to our next abode, which was in the heart of the city. The apartments are in a historical building that combines bohemian interiors and modern features, creating stylish self-catering apartments. 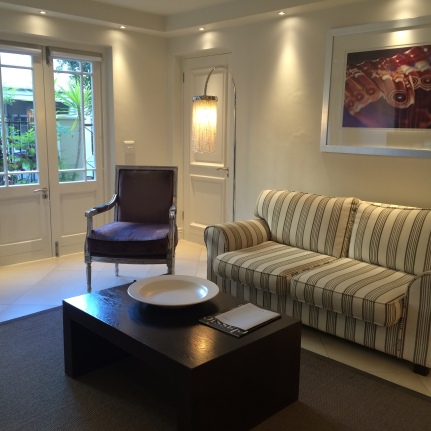 I loved that the place is conveniently located just off trendy Kloof Street.

One of many well-rated restaurants along Kloof St, Manna Epicure is known for its synthesis of French and South African comfort food served at its best. The interiors of this bake shop and fine dining restaurant are so warm and inviting.

Tasting what this Baked Camembert is all about. 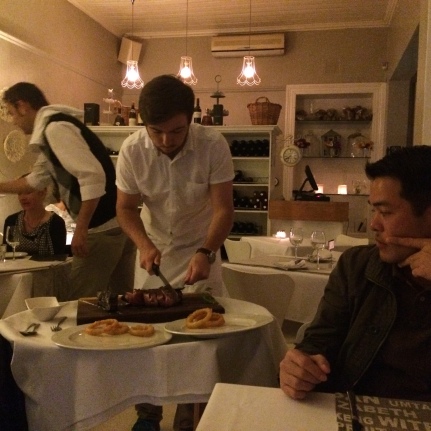 A little bit of crunch at the sides and juicy in the inside. Ribeye grilled to perfection!