Stories of our Justiniani Family tracing back to our Italian Roots was always amusing.  Sure, my mom and her siblings could pass as Italians with their fine bone structure and striking heights – and photos of my dashing Grandfather could definitely solidify the hopeful premise.  I would gush to my kids about my being 1/8th European as they would “tsk tsk” that they didn’t inherit such aspiring features. It was a promising, funny prospect that resurfaced when we bumped into our long lost Justiniani aunt last Sept 2017.  She mentioned with authority, that our clan did originate from Genova.  It felt like we were destined to get the facts straight once and for all … since our Christmas Cruise was stopping by Savona, about 40min away from Genova.  So did we resolve the theory?

The capital of Liguria, Genova is a large port city that lies in the centre of this long coastal region at the top of Italy’s ‘boot’. The town’s maritime importance goes back centuries; it was a powerful republic, and is still a major commercial port.  Genova is also a rejuvenated cultural centre – European Capital of Culture in 2004 – building on its rich history as well as looking to the future with contemporary architecture and a redeveloped harbour area. Weekend visitors can admire modern, Renaissance and Baroque architecture, fancy palaces and a host of museums and galleries. There are hip art cafes, boat trips and a large aquarium: a wide range of activities for a holiday or short trip.

Down by the rejuvenated Porto Antico (Old Port) are a number of attractions for all the family, including the Acquario, an aquarium which, along with the UNESCO listing, is Genova’s proudest attraction, and where visitors can admire sharks and dolphins up close. This is a great destination for children, but fascinating for adult visitors too. Nearby is the Bigo, a panoramic lift inspired by shipyard cranes, designed by local star architect Renzo Piano. As the lift revolves you can enjoy the views over Genoa’s port and hillsides.

The Cattedrale di San Lorenzo is Genova’s cathedral, set in a surprisingly small, sloping square. It’s a building in a patchwork of styles from Gothic to Renaissance, reflecting renovations over the centuries. The exterior is striped and decorated with coloured marbles, and inside the main portal is a fourteenth-century Byzantine-style fresco. The ashes of St. John were worshipped in a lovely Renaissance side-chapel attended by statues (take coins for illumination). Visit the church’s underground treasury to see a bowl claimed to be the Holy Grail and a platter said to have been the one used to present John the Baptist’s head. Just up the street from the cathedral is Genova’s former Ducal Palace, the huge Palazzo Ducale, which now hosts a range of changing exhibitions and events.

Genova boasts one of Italy’s UNESCO World Heritage sites. This status was awarded for the early town-planning of the Strade Nuove ‘new streets’ district, where grand palaces were erected in the late sixteenth and early seventeenth centuries as part of a scheme where noble families, resident in the new palaces, would pay host to visiting dignitaries. Via Garibaldi, an elegant narrow street lined with grandeur, is the cultural centre of tourist Genoa. The town’s best art collections can be visited here, in three palaces grouped together as the Musei di Strada Nuova: Palazzo Bianco, Palazzo Rosso and Palazzo Tursi, Garibaldi, where highlights include works by Filippino Lippi, Veronese and Rubens as well as many local artists.

Genova’s striking cityscape, with pastel buildings piled up steep hillsides above the long curving waterfront, is a sight in itself, and can be admired from a variety of viewpoints, including the roof of Palazzo Rosso and a popular terrace at Castelletto, high above the city centre and reached by a lift dating from 1909 which ascends from Piazza Portello. Taking a boat tour of the harbour will also give you a good idea of the town’s geography and history.

Had some free time to explore around Piazza De Ferrari, the main square of Genova.

The most popular place in Liguria to go shopping is by far Genova. As the capital of the region it has many different kinds of shopping places to offer, ranging from flea markets at the Piazzetta Lavagna (Every morning and afternoon from Monday to Friday) to many high quality and designer stores at Via Roma and Via XX Settembre. Not far from the Sampierdarena station, the airport and the famous Aqcuarium of Genova you will find a large shopping mall, known as Fiumara, where you will be able to find lots of clothes, accessories etc. for a more affordable price. For other reasonably priced italian label clothes and accessory boutiques you could also go to Via San Luca. Designer outlet stores, offering great discounts on the most famous labels can be found in Via Caffa. 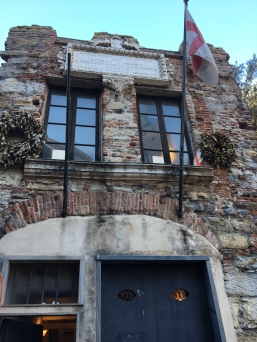 Where Christopher Columbus was born and raised. 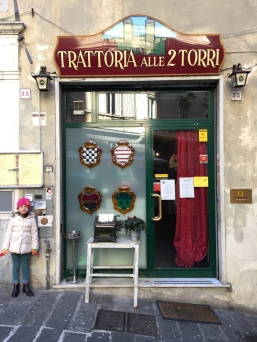 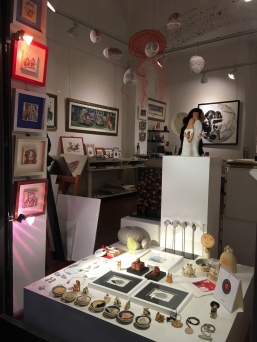 Genova’s old town was partly rebuilt after bombing in the Second World War, but it was reconstructed as it had been: a medieval maze of narrow lanes and tall buildings. The principal lanes are lively in the daytime with cafes and busy small shops selling everything from antiques to paintings. The alleys are intriguing to explore, past shrines on the corners of buildings, tucked-away churches, palaces reaching up to the sky, take-aways selling local snacks like farinata and focaccia, and great shopping opportunities.

We were so happy to chance upon San Siro Church.  With its low key exterior, we were amazed to discover such fine details with each having a significant story to be shared.

One of the oldest churches in the city, it was destroyed in 1478.  Thanks to much prodding from Cardinal Vincenzo Giustiniani and the Pallavicini family, it was reconstructed in Counter Reformation architecture, with a main central nave.  That nave was frescoed by Giovanni Battista Carlone with Conversion of St. Peter, Martyrdom of St. Peter, and Death of Simon Magus.  Paolo Brozzi completed the quadratura decoration.  The Chapel of the Pieta was commissioned by Taddeo Carlone in 1595 (and completed by 1606 by the marble carvers Santino Paracca and Alessandro Ferrandino).  In 1904, the romaneque bell-tower, due to its perilous situation had to be demolished and was never rebuilt.

Other works of art include the Triumph of the Cross in the cupola by Carlone, and canvases of the Annunciation, Birth of Mary, and St Anthony by  Orazio Gentileschi (the brother of  Aurelio Lomi) . Other artists with paintings in the church include Domenico Fiasella, Giovanni Domenico Cappellino, Andrea Semino, Giacomo Lomellini, Cristoforo Roncalli, Gregorio De Ferraro, Domenico Piola (2nd chapel on right), and a Decapitation of Saint by Carlo Bononi . The church contains a number of sculptures by Taddeo Carlone.  The main altar design and sculpture were completed by Pierre Puget . (Wikipedia) 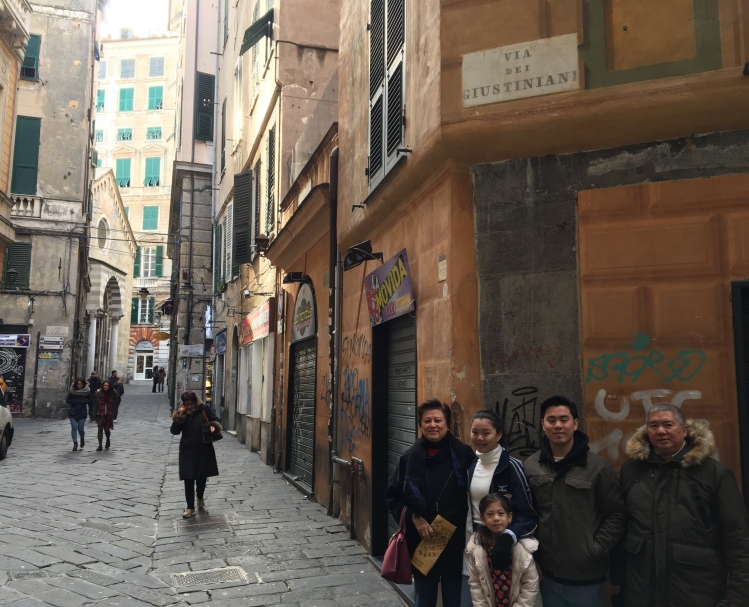 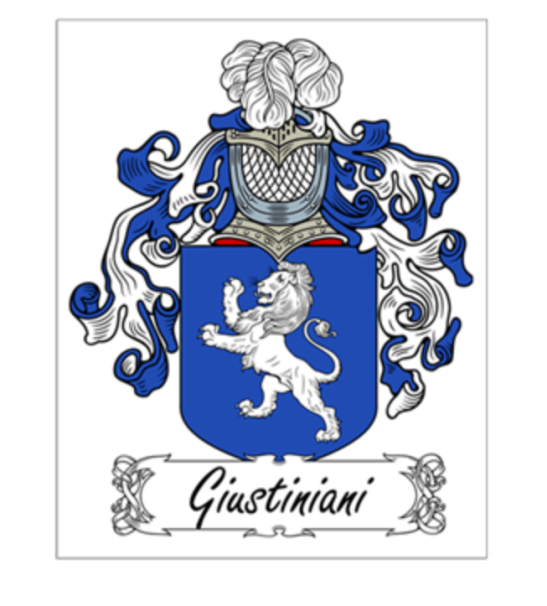 As we perused through the narrow winding streets of Old Town Genova,  admiring art galleries and local artisan shops we came across Via Dei Giustiniani, A street named after Giovanni Giustiniani –  Didn’t really believe it before but mom was not kidding.  We actually found our roots in Genova.  Our guide explained that the Giustiniani Family established heritage in Genova, extending hold on the Greek Island of Chios.  Coming from a family of traders / merchants , some descendants may have explored and settled in other parts of the world … possibly Yes .. even in the Philippines.  This definitely made our day in Genova!