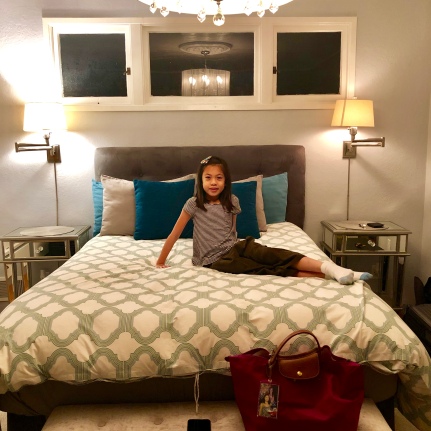 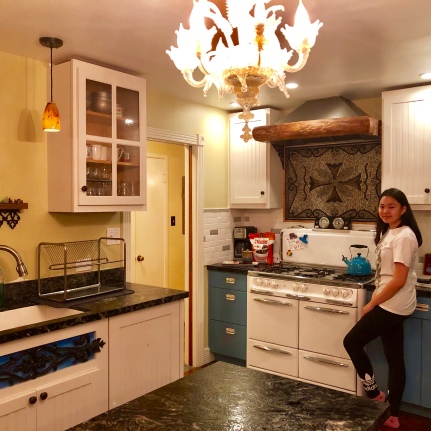 “April’s place was spot on clean and stylish. A great space for families or groups as there is a nice patio in front and at the back to enjoy home cooked meals. It was very comfortable. All of us rested well in it as if we were really home!”

Lombard Street in San Francisco is one of America’s crookedest streets and found on many tours. The steep, hilly street was created with sharp curves to switchback down the one-way hill past beautiful Victorian mansions.

If not for the byzantine curves, easing out this treacherous slope, people could be killed rolling down. For an idea of how steep this street really is, go two blocks up, to Filbert Street and peer down over the ridge. Lombard is even steeper.

Some of San Francisco’s most expensive real estate sits on Lombard Street. This Russian Hill neighborhood possesses stately mansions even with the endless array of tourists pouring down the street every day. In the spring and through the entire summer, Lombard Street is alive with color, as the many beautiful flowers are in bloom.

This Roman-inspired palace built in 1915 remains a modern-day renaissance center of fine arts and science. The Palace of Fine Arts was created as a star attraction at the 1915 Panama-Pacific International Exposition. The expo celebrated the completion of the Panama Canal and San Francisco’s recovery from the 1906 earthquake and subsequent fires. Designer Bernard Maybeck themed the construction around Roman ruins, drawing inspiration from both Roman and Greek architecture. His intention was to show “the mortality of grandeur and the vanity of human wishes.” 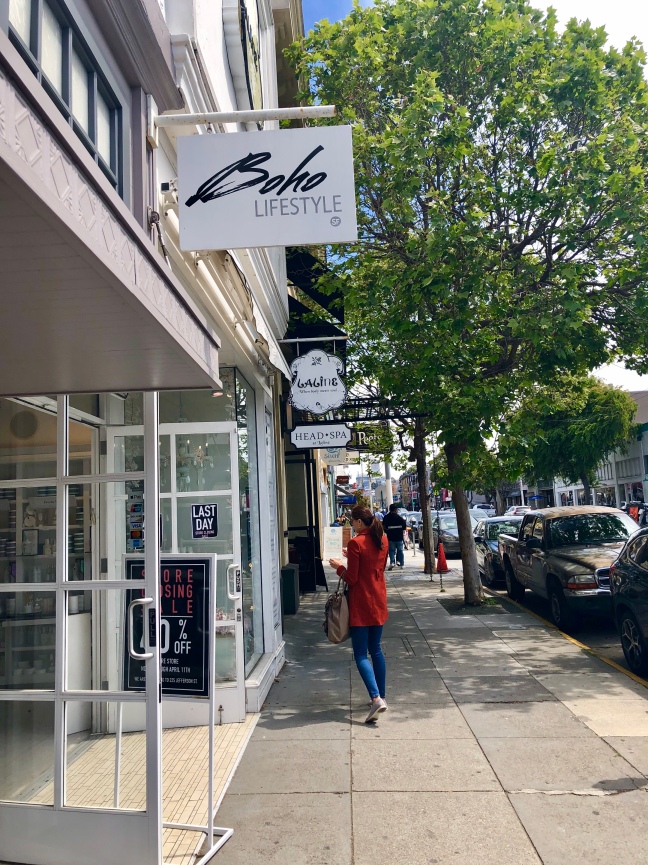 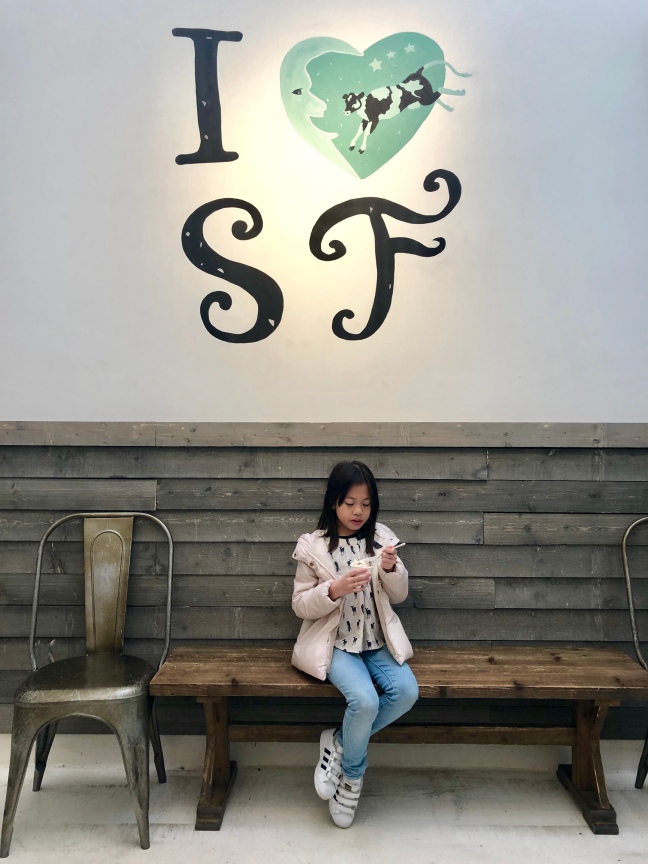 “A trendy neighborhood that is perfect for a day of indulging, the Marina bustles with a “work hard, play hard” energy. Union Street and Chestnut Street, running parallel to one another through the Marina, are home to neighborhood eateries and culinary superstars, hip cocktail lounges and historic watering holes – all of them catering primarily to a local crowd. This neighborhood is the perfect place to eat a meal or grab a drink before or after checking out the Golden Gate Bridge, the Presidio, the Palace of Fine Arts or Crissy Field.”

The mile-long Baker Beach lies at the foot of rugged serpentine cliffs west of the Golden Gate. Large waves, undertow and rip currents make the beach unsafe for swimming, but it provides panoramic views of the Golden Gate Bridge, Marin Headlands and Lands End. 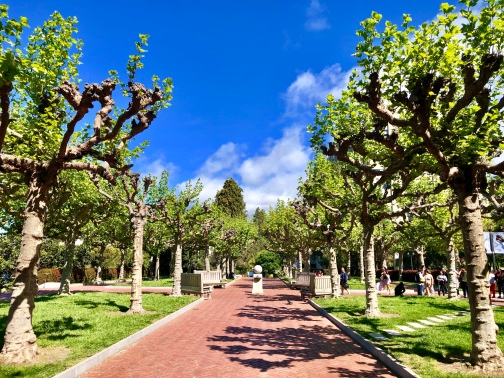 “Renowned for its prestigious university and appreciated for its offbeat Bohemian spirit, Berkeley is a fun place to visit. The university’s inspiring Neoclassical buildings stand loftily in a woodsy hilltop location overlooking the San Francisco Bay. The campus was the birthplace of the Free Speech Movement and the renegade hippie counterculture of the 1960s, and the chaotic and bustling Sproul Plaza continues to be an intense scene of student activity.

Besides being an intellectual center, Berkeley is a hub for entertainment and gourmet dining. The local organic food movement began here in the ’70s with Chez Panisse, a delightful French-California-style bistro, which is an obligatory stop for foodies. Tourists can enjoy a delicious meal in the Gourmet Ghetto and then watch a world-class performance at one of Berkeley’s award-winning theaters. Nature lovers also have a good reason to visit: The city’s gorgeous parks and botanical gardens offer spectacular floral displays and stunning panoramic views.” 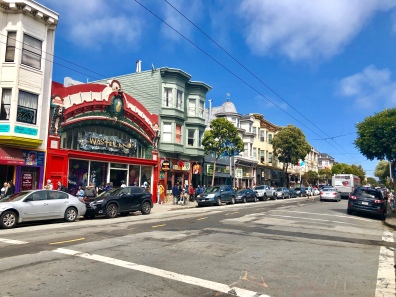 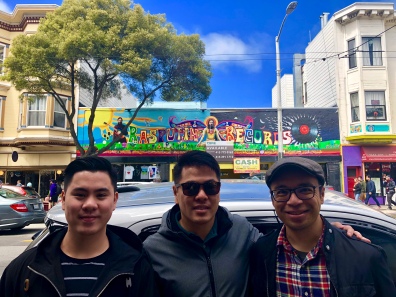 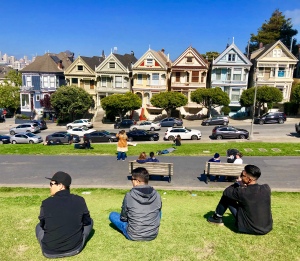 Alamo Square in San Francisco is a beautiful and centrally located neighborhood that is home to the famous “Painted Ladies” or “Seven Sisters.” They are a group of seven similar, colorfully painted Victorians that sit right along this district’s popular park. You will also hear this row of houses called “Postcard Row.”

The Sutro Baths were the passion project of Adolph Sutro, an entrepreneur who was also a former mayor of San Francisco. Set in the western part of the city on a cliff facing the ocean, the views afforded by the Sutro Baths were (and still are) impressive.

The baths themselves were built inside a large and impressive structure and consisted of six saltwater pools and one freshwater pool. The saltwater pools were filled by the incoming high tide, and an underground turbine pump was able to refresh the water every five hours during low tide. Completed in 1890, the Sutro Baths were an impressive feat of engineering in and of themselves, and were a popular destination for citizens of San Francisco and visitors alike.

However, by the start of World War I, the popularity of the baths had diminished significantly and attempts to revitalize their popularity — which included converting the baths into an ice skating rink — ultimately failed. The baths were slated for destruction, to be replaced by high-rise condos in 1964. Before that could happen, the remnants of the Sutro Baths were destroyed by fire and the condo plans were abandoned. Today, the ruins are a testament to the vision of one San Franciscan and how he saw the city. 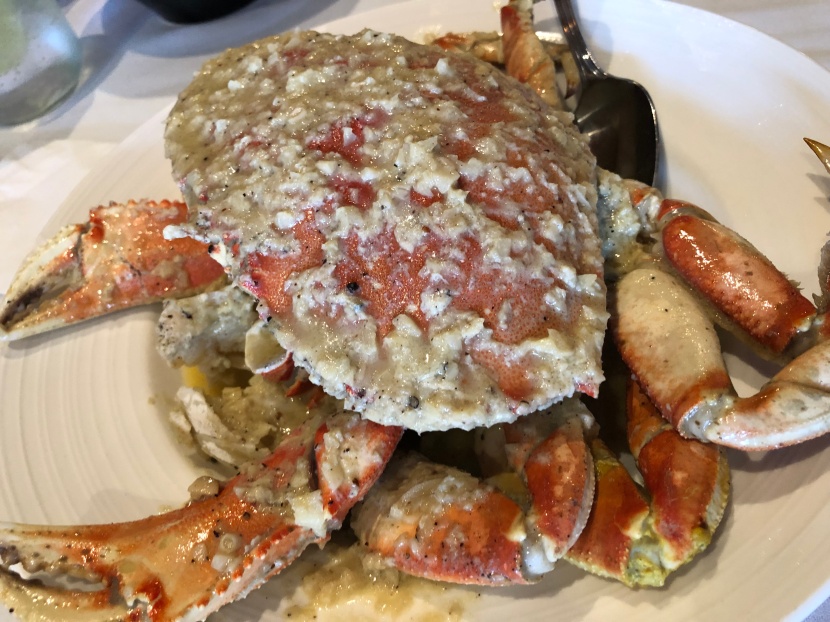 San Francisco’s Outer Sunset is on the Pacific-most fringes of city limits, but this neighborhood boasts expansive Ocean Beach, parks, a surfer chill vibe and an array of amazing food, shops, and some great bars to boot. 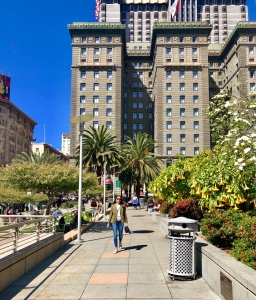 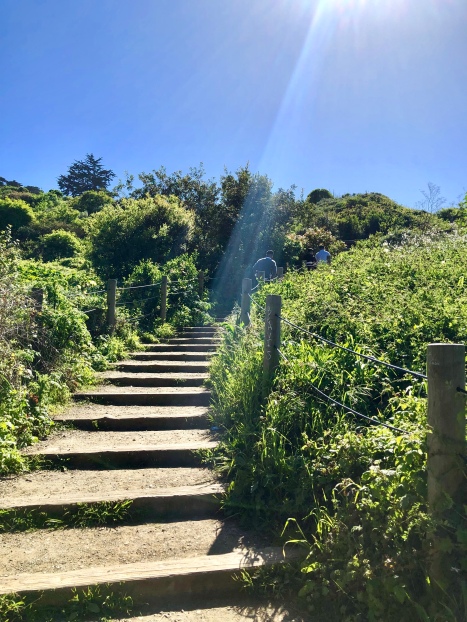 Delivering the wonders of land, space, and water in one exquisitely wrapped package, the California Academy of Sciences brings the above, below, and beyond of the entire world to life.

Serving as one of the largest, innovative, and most eco-friendly natural history museums in the world, this Golden Gate Park jewel glistens with the promise of prehistoric sensations, astronomical exploits, dazzling gems and minerals, and living examples of extraordinary plants and animals. https://goldengatepark.com/academy-of-sciences.html

In front of De Young Museum

De Young showcases American art from the 17th through 21st centuries, modern and contemporary art, photography, international textiles and costumes, and art from Africa, Oceania, and the Americas. 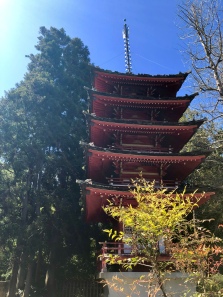 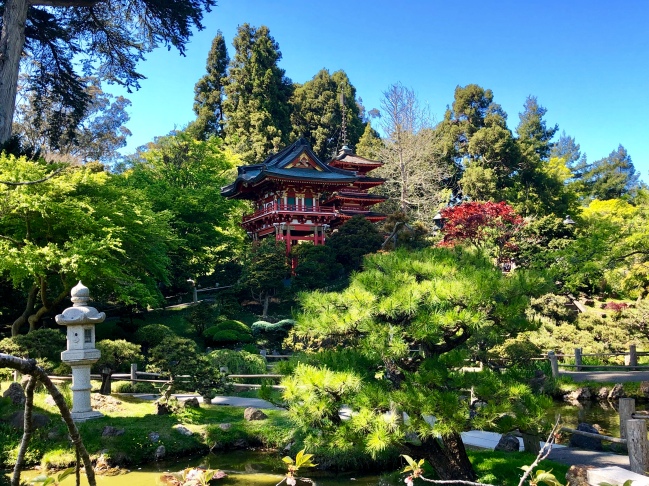 The first public Japanese Garden in the U.S., this rustic stroll-garden was constructed by Japanese immigrant and landscape designer Makoto Hagiwara. It originated as part of the 1894 California Midwinter International Exposition, but upon the exposition’s closing, Hagiwara asked park superintendent John McLaren if the exhibit could become a permanent addition to Golden Gate Park as a gift to the city. Hagiwara funded the garden construction himself, going to great lengths to procure art, and exotic plant species from Japan. He was caretaker from 1895 until his death in 1925, expanding the garden to five acres.